The Castor Legion has been actively involved and helpful in many organizations over the years and has supported many programs as well. The Castor Legion provides funding for events and also helps with student grants. Their major commitment is to maintain a presence for our Veterans and our dependents.

Excerpt from Beaver Tails from Castor & District
PO Box 22
Castor, AB T0C 0X0
Lyn Holloway: 403-882-2460
castorlegion119@gmail.com
For Bookings Contact Sue Goodkey
403-882-4515
History
The Castor Legion Branch #119 held their first meeting on June 21, 1932.
There were fifteen Castor Legion Charter Members namely, Arthur C. Moore, Bertram J. Barnes, Edgar Sharpe, Harold B. Windross, Harris G. Rogers, Edward J. Elder, Charles J. Johnson, John Grove, Elvyn Waade, James E. Brown, Harold J. Davies, Thomas E. Corbett, Joseph J. Burns, Arthur J. Wright, and Douglas W. Paradise.
The Castor Legion has been actively involved and helpful in many organizations over the years and has supported many programs as well.
The Castor Legion provided a meeting place for Legion members, The Ladies Auxiliary to the Legion and a meeting place for the Elks for over 40 years. They accommodate the public at large whenever they needed space for an event. The Castor Legion has also been supportive of other service groups such as the Lions, Kinsmen and many local sports teams, such as the Senior Slow Pitch Ball. They believe strongly in being there for the communit when they are needed.
The Castor Legion provides funding for events and also helps with student grants. Their major commitment is to maintain a presence for our Veterans and our dependents.
Castor Legion was truly dedicated to the principle of seniors living independently in their own homes. Consequently, the Legion was instrumental in beginning to get a Senior Housing Project for the seniors here in Castor.
The first manor was completed and opened in 1981, and again organized for a second project which opened in 1985, and again, a third project in 1990. The three projects were named Castor Legion Manor I, II and III. They are now named: Evergreen, Prairie and Sunrise Manors. The Legion worked with the municipal, provincial and federal agencies to augment this official program. In 1997, it was decided that the Manors should be put under a local operating authority board, to which the Castor Legion agreed and then the Castor and District Housing Authority was formed. These wonderful Manors are very appreciated by the folks of Castor as they transition from their own home to places that provide help when needed.
The Legion sponsored an Air Cadet Squad for the Castor area. This Air Cadet Squadron has influenced many of our youth to go on into aviation or a military career.
Excerpt from Beaver Tails from Castor & District

Remembrance Day is an important day in the Canadian calendar and is an opportunity to give meaning to past sacrifice and acknowledge the courage of those presently serving. Each year, on the eleventh hour of the eleventh day of the eleventh month, we gather in memorial parks, community halls, workplaces, schools and homes to observe a moment of silence and mark the sacrifice of so many.

The Act of Remembrance

They shall grow not old, as we that are left grow old;

Age shall not weary them, nor the years condemn.

At the going down of the sun and in the morning

We will remember them.

We will remember them.

The major responsibility, for the Legion, is for the continuation of "REMEMBRANCE" in Canada through the Annual Poppy Campaign, reminding Canadians of the men and women who gave their lives in the wars and military missions around the world. This campaign is conducted each year for about 2 weeks prior to November 11th in order to raise funds for need Canadian veterans, ex-service members and their dependents, as well as Commonwealth veterans.

The Poppy is the International symbol of Remembrance. When you wear a Poppy or display a wreath, you honour the war dead and help ex-service personnel and their dependents. Everyone should be encouraged to wear a Poppy, as it is a way for all Canadians to honour the memory of the thousands of Canadians who gave their lives in the defence of freedom. The Legion holds Memorial services to remember the nation's losses with two Minutes Silence on Remembrance Day, November 11, in numerous communities. 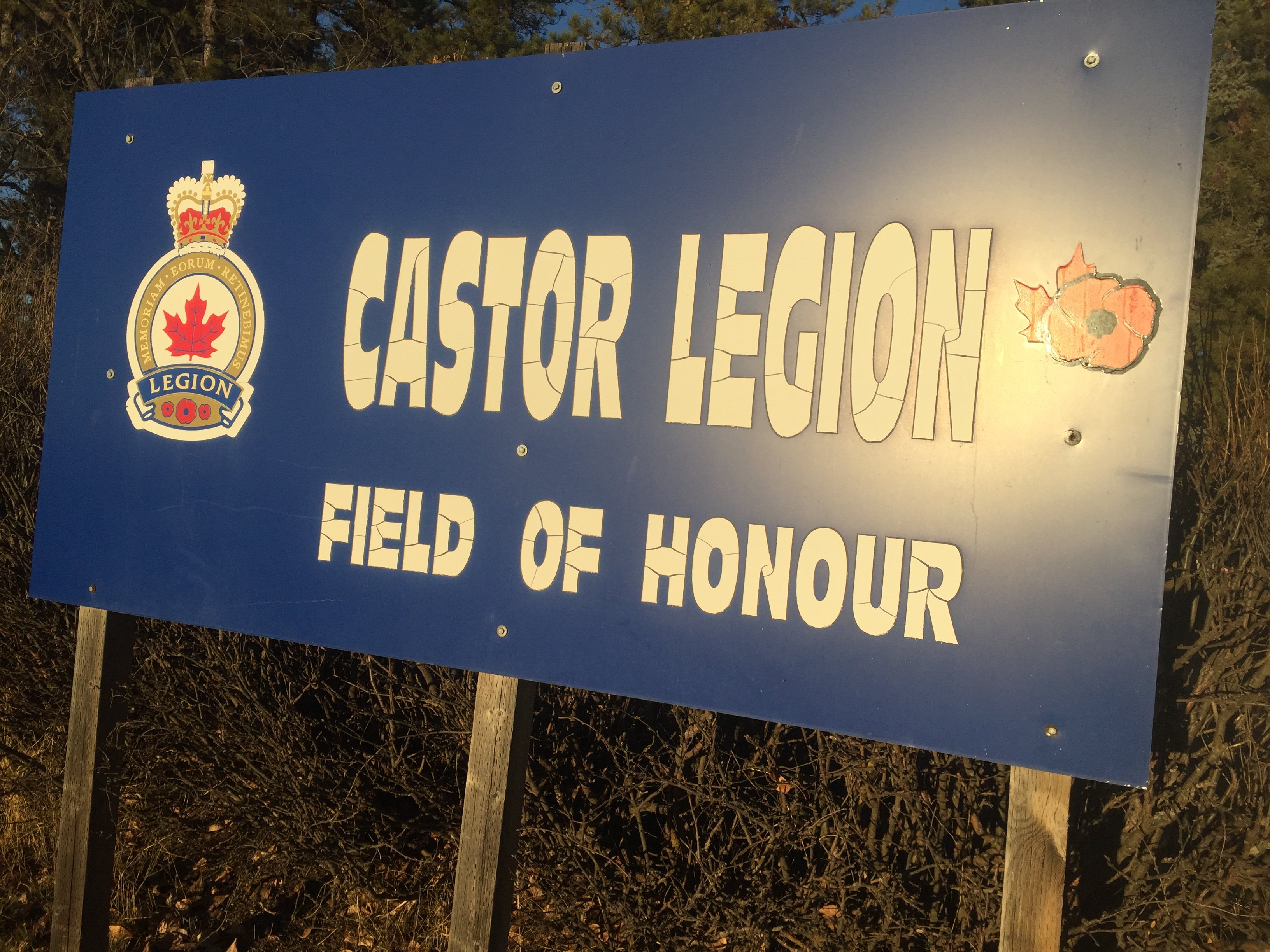 George Davidson was instrumental in planning the Castor Legion Cemetery, which is a lovely Field of Honour for Veterans. It was George and his daughter who planted every one of the beautiful trees that has given this place the solitude and comfort that one needs when you visit. Years back he and his daughter continually hauled water by hand. They walked back and forth for over a mile each way carrying this heavy load, just to keep the trees alive.

To honour the labour and love that was required to develop the Cemetery, there is an attractive Plaque in memory of him. It is placed at the foot of the cairn at the Castor Legion Cemetery and it reads:

"In Memory of George Davidson,

Whose foresight and dedication made possible

This Field of Honour,

To be set aside for the Veterans"

The Castor Legion's entrance was beautifully renovated. It was a gift given by the daughter, on behalf of her parents, George and Jeanie Davidson, to celebrate Castor's Centennial in 2010. They provided a beautiful patio, walk way and picnic table that will be used for years to come.

Castor Legion was instrumental in the installation of the perpetual gas flame at the cenotaph on Main Street in Castor. It was the Legion's "1967 Canadian Centennial" Project with the help of the donation from Jake Nett, who was an ex-serviceman and Legion member. They dedicated the Eternal Flame in memory to those who paid the supreme sacrifice in the Wars.

In readiness for the July 2010, Castor 100th Centennial, a dedicated group of Castor Legion members and Castor community volunteers revitalized, restored and completed the beautification of the Cenotaph.

A War Memorial Plaque Ceremony took place on July 10, 2011 at The Legion Cenotaph on the main street of Castor. This bronze plaque contains the names of men from our community who sacrificed their lives. The plaque was donated and dedicated to our community, by Helen Bowen on behalf of her late husband Ivor Bowen.

It was Ivor's dream to display publicly the names of his comrades from this community who gave their lives for Canada. He worked long and hard to gather this information going all the way back to the Canadian Archives for some of it, and placing ads in the local papers. Unfortunately, Ivor did not live long enough to complete the task, so Helen finished it for him. This beautiful plaque recognizes the souls and their families who paid the supreme price so we can have the community we have today.

Family and Community Support Services is a partnership between the Province of Alberta and the municipalities of Castor and Halkirk, that develop locally driven preventive social initiatives to enhance the well being of individuals, families and communities.

In the Castor office there is:

Happening at the Centre:

Bingo every other Wednesday - 7:00 pm